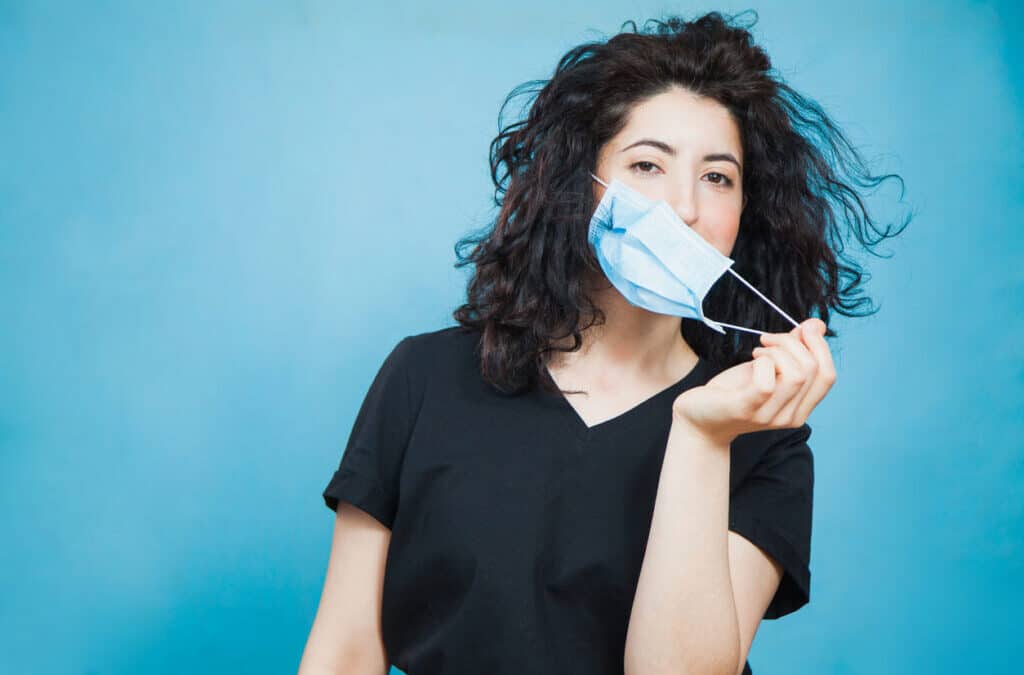 I have gotten many questions from those who follow my work about wearing masks so I took a weekend off to do research for this article. I guess my aha moment that something didn’t make sense about the whole mask thing was when I was in a drug store recently. I picked up a box of blue disposable masks, the kind that I see most of the people wearing and on the side of the box the instructions said “not meant to prevent the spread of infectious diseases”. At that moment my doubts began to be validated that I have been living in a world of a massive healthcare illusion. I chose to dive deeper. I did the research without going to google or social media since it is obviously corrupted information and instead went behind the scenes to avoid spitting out the same false narrative that everyone is reading.

What is the truth about masks?

It is difficult to find reliable research as the good stuff is hidden from the mainstream view or censored.  I did however find many studies from hundreds of thousands of  doctors and scientists all over the world that not only say masks don’t protect us from viruses, but that we should not even be wearing them at all as they are detrimental.  I never found reliable evidence to support mask use for asymptomatic people or to stop a viral spread. Surgical and cloth masks have absolutely no impact on controlling the transmission of the virus.

Social distancing is another joke on us.

There is no evidence of what the CDC relied on to determine a distance of six feet. In most of Europe they recommended 3 feet. The world health organization recommended one meter. So Hong Kong is a meter, South Korea chose 1.4 meters, Germany, Italy and Australia opted for 1.5 meters. What is sad is that the social implications and cost of implementing this nonsense was a royal waste of time and difficult to back up with the absence of any studies.

So what is my position on masks?

It is based on scientific data. Studies show that it is extremely unhealthy to wear a mask. Many of the masks we are wearing are so contaminated that they are finding an abundance of parasites of bacteria on most of them and the parasite load in people is growing by the day. Above and beyond the contamination issue and lack of oxygen, spiritually, wearing a mask creates distance between people, communication is harder and we risk misunderstandings. It is just one more thing that separates us at a time when we should be coming together. The symbolism of a mask is deeply damaging to human relationships, the building of a collective community and the overall mental and physical health of our planet. Except for the N95 masks that are typically used in hospitals and high risk settings with gowns and gloves and PPE, there is no effectiveness of anything less than that standard.

Ironically in the early onset of the pandemic, nearly all of our government specialists advised against wearing a mask.  So how did the usage of the mask become mandatory? Did science just all of the sudden make a major discovery about masks and decide to change their theories? I do not think so. I cannot deny that there was something way beyond the mask mandate that was dictating this. The underlying manipulation of using a mask was about keeping fear, anxiety and paranoia going. A constant reminder that our lives would be changed forever. The bottom line, it was social engineering, adding the fuel to an already divisive world. As an intuitive I felt the deceit and didn’t buy into it. I only wore a mask when my rights were threatened, like flying on a plane. But what was so startling to me was how so many people never researched this on their own. All they had to do was look around for the evidence, it was there. But no, people bought worthless masks and like sheep fell into step without questioning the government edicts regarding their own health. It was like a world trance.

It is so dangerous turning over our individual power and consciousness to a collective insanity.

All of a sudden, Anthony Fauci became the world’s new health “guru” and nobody was listening to Dr. Mercola and other brilliant alternative teachers. All the while behind the scenes in Washington D.C they were mixing the kooky kool aid of fear science.  Our most precious right and freedom is our body and its sovereignty as a human being. There is not a government in the world that has the appropriate interests for our personal health, yet we defer to unaccountable bureaucrats for our health decisions? Does that make any sense when our governments are not confiable and in fact corrupt? Since COVID started its voodoo on our planet I have been in a state of great sadness as I saw so clearly the manipulation of people I love, I trusted and I looked up to. I saw them completely engulfed in a mixed up paradigm. I tried to stay neutral and out of commenting about it to those who were fixated on the mainstream media which was strangling objective thought and reasoning. Like a boa constrictor, they were squeezing the life out of so many beautiful people by selling a  fear based reality and contributing to the breakdown of our immunity.

Spiritual teachers talk about how the world is an interrelated system of connections in that every single action will affect the whole. So, even though we were convinced that we were “harming” others by not wearing a mask, what about the fear we were spreading around by wearing one? Fear has been known to be extremely unhealthy to our immune systems. In a collective world there are always consequences no matter which side of the illusion that you are on by the duality of our actions.

In a time of crisis most people will take a leap into fear and panic, the two ingredients that contribute to a sickness of the soul. In my coaching practice the underlying cause of every illness and disease is the depletion of the soul that leads to the deterioration of mental health and then physical health. The statistics are shocking as to what this faulty CO-voodoo propaganda caused.  A survey conducted by the Centers for Disease Control and Prevention at the end of June revealed that 1 in 4 young adults (age 18-24) had seriously considered suicide during the “crisis”. Lockdowns have led to unemployment rates  comparable to that of the Great Depression. This has contributed not only to financial hardship but also to the loss of a sense of purpose and self-worth that comes from meaningful work and economic self-sufficiency. Further, lockdowns have reduced our most important sources of support during times of crisis:  in-person social interaction—including the comfort and consolation of human touch—as well as the meaning, and connection provided by communal religious and spiritual practice. Add to this the grieving of the loss of loved ones, we need to evaluate whether the measures being taken to contain the virus may be the real culprit of our susceptibility to this illness.

So what should we learn from this?

First of all, I am not diminishing the death of anyone who died from CoVid. I know there are many families who have paid the ultimate price with the loss of loved ones and it is a terrible tragedy. I lost both of my parents to other causes this year and I get it, grief is brutal. But the truth is that those who died from Covid, died because of an immune system that was not capable of fighting off the virus. So again, I blame health officials as I never heard anyone talking about boosting your immune system, it was all about wearing a mask that did not protect you which was a worthless endeavor.

My research brought me to the conclusion that the recommendations of public health officials are based on incomplete data and predictive models that are far from certain. It is dangerous for these recommendations to impose the way we live our lives and dictate health policy. Governments are inherently political and therefore not rewarded for getting it right, but for how much they can control the populace into succumbing to their view of the world, which in the case of masks, steered us in the wrong direction.

No comments to show.