Lori has had a lifetime of entrepreneurial pursuits. She was the founder and creator of several highly successful businesses that took her from the the board rooms of Wall Street to the world’s premium wineries. Later pursuits included hospitality and sustainable tourism development and founder of a foundation dedicated to social and environmental causes in Central America. Living most of her life in El Salvador she acquired a deep passion for the Mayan culture and the Mayan descendants that live there. On the night before her 52nd birthday, at her home on Lake Ilopango, she experienced a life changing event when a major spiritual event orchestrated by ancient Mayan spirits occurred and shifted her awareness out of the third dimensional world that we all live in. For two years she was “stuck” in an inter-dimensional existence where her perceptions of the human body and life experience gave her a unconventional view of illness and physical and mental dysfunction. She received an instant knowing of plant medicine and ancient shamanic practices and was initiated by spirits for two years to learn the old ways of healing. Later, she was downloaded the steps to combine these concepts with the theories of quantum physics and the use of scalar energy. Now, through the use of cutting-edge technology, sacred science, and shamanic healing practices she is able to go beyond the symptoms and see the underlying causes of illness, provide successful remedies and bring the awareness needed to resolve chronic conditions and overcome stubborn barriers to health. After her own spiritual awakening she is especially gifted in helping others reach higher levels of consciousness and understanding. Her positive outlook, emotional generosity and contagious sense of humor adds a special component to her style making it a fun and enlightening experience in learning to see your life from an unconventional and unique perspective that will have you living and thriving in the magic of possibility.

LORI, The Disintegration Of My Ordinary Reality is Lori’s amazing memoir that describes her spiritual awakening after the death of her husband, her struggles with others’ perceptions of her “sanity”, and her ongoing work to embrace a role as someone with one foot in everyday reality and the other in the spirit world. Through her experiences, many now have a broader understanding of what western medicine has come to label “crazy” and which has generated a greater sense of our place in a multi-dimensional world. 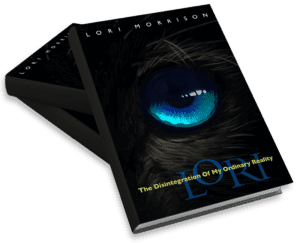 At the heart of the story are a series of events that unfold at her home on a remote peninsula inside a volcanic lake in El Salvador, where she experienced a barrage of psychic phenomenon including “coincidental” rainbows, indigenous drumming, snakes, and spontaneous rain clouds. These events crescendo to a night when, after a lightning storm, she was hit by a light beam. After three hours lying alone in a non-conscious state, she awakened to find that her perceptions of the three-dimensional world she lived in were no longerher reality. In a subsequent experiences she had seven out-of-body experiences that would eventually drive her to the edge of insanity.

With the sudden dissolution of the veil between the human and spiritual world, she was able to see, hear, and feel spirits from multiple dimensions. Oddly, she also received knowledge of ancient shamanic practices and of what she believed to be an ancient Mayan language. Doing her best to live an ordinary life after an extraordinary experience, she faced extreme challenges as she was dramatically affected by electronics, vibrations, and a chorus of Mayan ancestral voices that begin to communicate with her. Having been a left-brained entrepreneur most of her life, she had no template for understanding these experiences. In line with the well-documented prophecies of the Mayans, the voices spoke of a new age when there will be a return to the heart and a kinder, gentler society will emerge. They go on to share that many are hearing the call to this shift and emerging to spread the wisdom of this cycle and that somehow she played a role in this awaited time. Dumbfounded by the information, she realized that in order to fulfill her role in this cosmic connection she must take the first steps on a six-year spiritual journey which ends on the edge of the lake on the morning of December 21, 2012.

This book is an amazing peek into the author’s extraordinary spiritual awakening. I felt like I was traveling with her to every place and personally experiencing a whirlwind of emotions along the way. This is excellent writing as I was engaged from start to finish and could not put it down; anxious to turn the next page to see what would happen next.

This book is more than just a memoir, it is an unfiltered look into a woman who made the incredible sacrifices while experiencing a full blown shamanic initiation. Woven into the almost unbelievable experiences is also a beautiful love story featuring an unconditional love that fueled her passion to find her husband Tino on the “other side”. Reading this book, you will go deep into the spiritual world, opening your eyes and minds to infinite possibilities, something that few can imagine or even express.

Even more remarkable is the fact that Lori was able to finally embrace the experience and wisdom gained through this incredible journey and now also help others find their spiritual path in the world.

This will probably become a classic book about the wonders of the spiritual world.

You are cordially invited to change your life... Join me at my retreat in Costa Rica